My best friend, Michael, had his passing out parade today. It was very exciting. I met his family at their travel lodge, we drove to the camp and had a wander around the base. We then went on to the presentation and got good seats. It was quite chilly there but LOADS of people turned up and it was lovely to see so much support for the boys there. We had a minutes silence at 11, and continued on with the presentation. After that, we walked to the parade square, got front row seats, and wait for the boys to come out. They looked so smart and lovely whilst waiting for the man to come and inspect them, but he was late and it was so cold for us in our gloves, coats and scarves, I can't imagine what the poor boys were like with their hands on their rifles. Oh yeah Michael is in the Rifles regiment. So the man came out, the boys got inspected, they all did their march and came back. The chosen ones got given awards, and then returned back to their places. Then the two other groups marched off, whilst we waited for the Rifles to do the double past us. I got a bit teary when they marched past, not that I let him know that. ha. I also forgot to take pictures as he marched past as I was a bit awe struck at him in his fancy uniform. We made our way back up to the Naafi and queued ages for the loo. When his sister and I finally got out, Michael was already back in the reception room so I gave him a big hug and told him I was proud. His mum felt a bit unwell and rested. We chatted for a while and then Michael, his sister and I went to view his room, it was small and very unprivate! We got back into the car and I got dropped back to the travel lodge. I was sad to see him go, but wrote him a special passing out letter to let him know my feelings.

Michael if you're reading this, I love you, and you continue to amaze me.

p.s. I will have photo's but I left my camera in his dads car so they won't be available for a while! xx

Here's my fave from the day 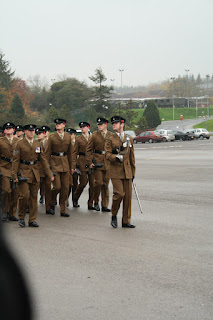 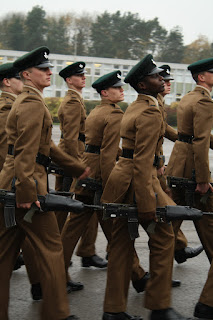 Michael is the third from the right in the first photo,
and then the clearest fellow at the back in the second 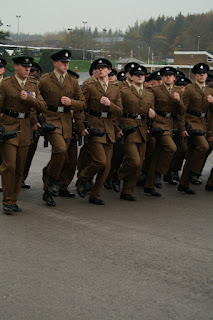 Michael is the third from the left in this photo 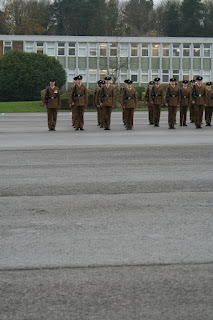 Michael is the third from the right, on the front row :)