Michael and I spent another day in Exeter at the weekend, and I think this is likely to be a little feature on the blog as we like exploring the city.

This time we looked around Northernhay Gardens and went to a restaurant called Ruby for lunch. 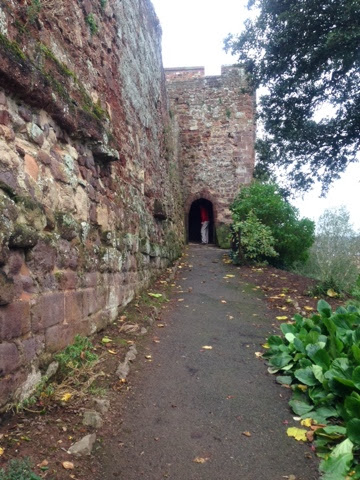 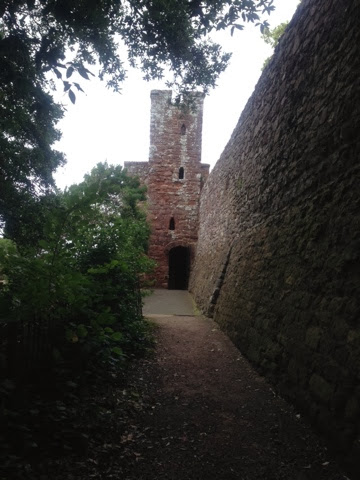 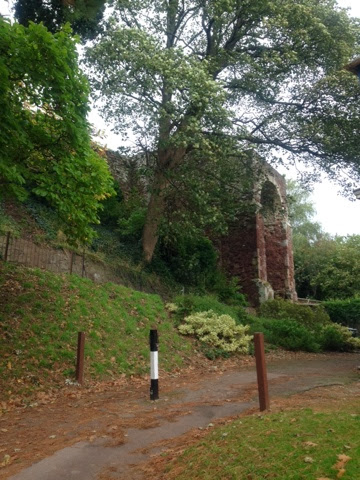 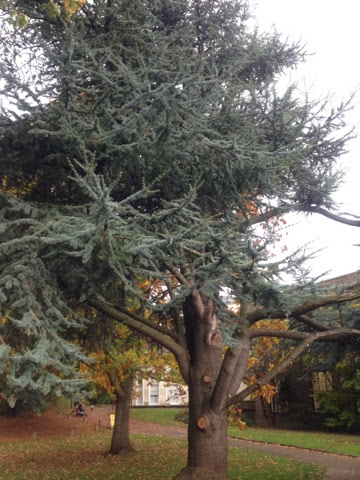 I really love this tree, do you know what kind it is? I'd like to know.

Ruby was a we'll decorated restaurant, the staff were really friendly and the people had a nice buzz. All the ingredients are sourced locally and the dishes were well put together. 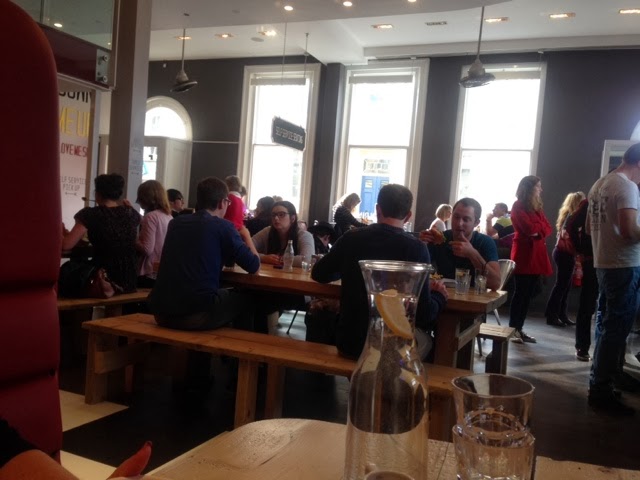 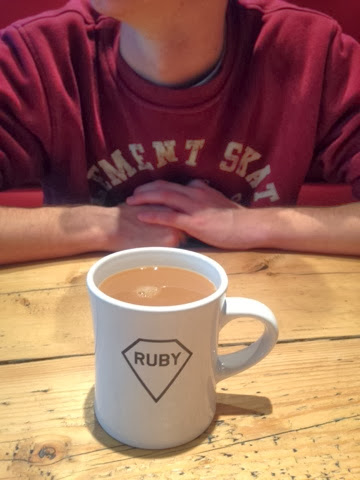 I had a really good filtered coffee, and Michael over paid for a can of cream soda. 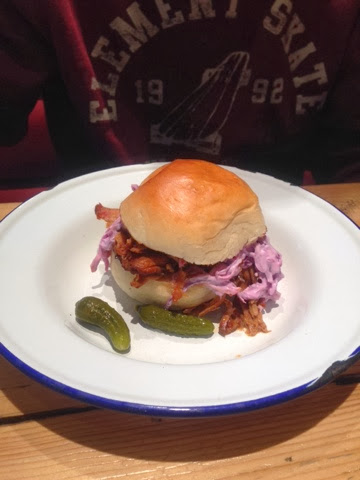 This is the reason we went - Michael loves a pulled pork bun (I get the gherkins and coleslaw). 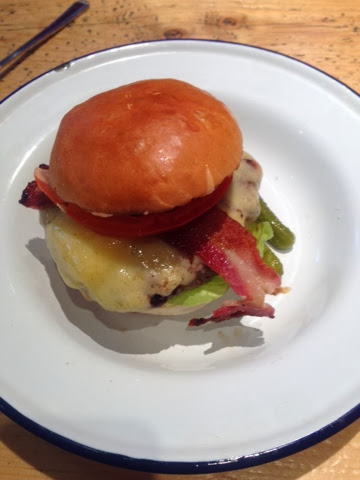 And I got a ruby burger (cheese and bacon, clearly).

I wanted to like this place, I really liked it when we peered in from the outside and even went in, but the food was a miss. Michael liked his bun but it was a very small portion, the cheese in mine was far too strong, my whole burger was excessively greasy and the slither of bacon was tiny.

I wouldn't order one again and it's put me off trying anything else there to be honest. It didn't ruin the day though- we shopped for a little while and then went back to the boston tea party (our favourite little cafe it seems! More on that later...)

As usual, it was such a good day. It always makes feel rejuvenated and ready for work again in the evening :) have you heard of ruby restaurants? What did you think?

Posted by StaceyFacex at 03:28 1 comments

Michael and I have had some culinary delights recently! My favourites have definitely been the Macaroons from lidls. They're currently on offer for £1.99, which is such a bargain as they're usually very expensive (in my opinion). 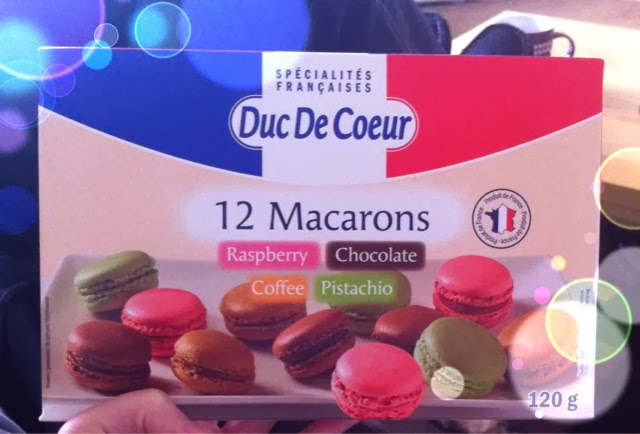 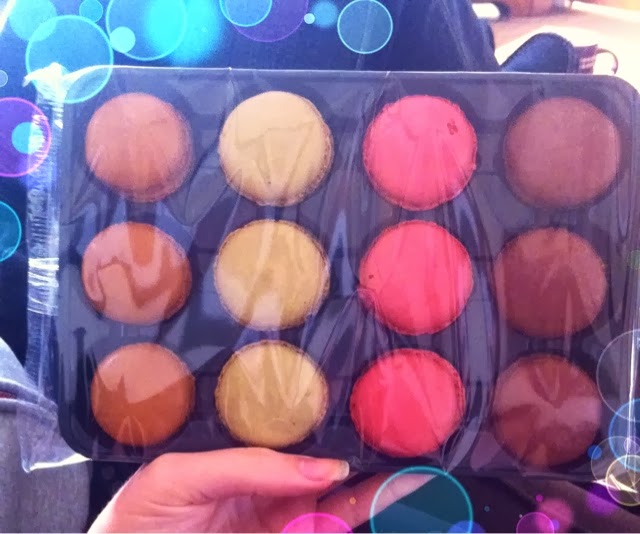 Coffee, pistachio, raspberry and chocolate. The pistachio one was incredible and a clear winner in my opinion but the coffee was a runner up. 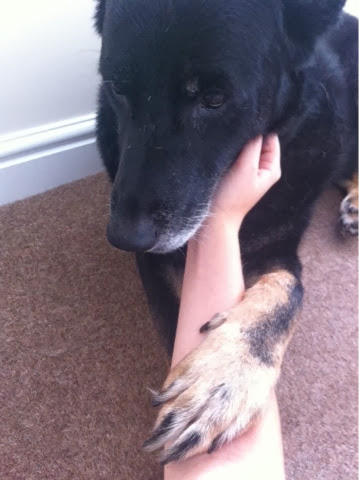 Bruin wasn't allowed any, but he still loves me!

Posted by StaceyFacex at 14:14 1 comments

What I wore: Fleece Lined

It's no secret that I'm a big fan of charity shops. I nabbed this little bargain a while ago, and asked my mum to take it up. It was quite an effort as it is some kind of magical dress that always looks tapered. It cost a grand total of 90p as the shop had a half price sale on that day, and although a button is missing, it was still a clear steal!

I paired it with the wide grey belt I made, and the mustard clip belt from primark. I also have fleece lined leggings and, to make up for the little amount spent on the dress, MY NEW BOOTS!! ee! from this post the other day, I got paid holiday pay unexpectedly, and decided it was my necessary purchase. The delivery was quick, the boots fit great and inside they are also fleece lined - a nice touch that wasn't listed (or I didn't read.. which is more likely)

I'm excited to put together more outfits with these badboys, I'm so glad they arrived in time for Autumn! And with this awful storm coming in, I will still be toasty.

Posted by StaceyFacex at 08:17 1 comments

You know I'm a sucker for something scary. Films? Definitely. Stories? Uh Huh. Walks in the dark? I'm there. Maybe you weren't around last halloween, but for those of you that were - do you remember Michael and I went to Alton towers for their scarefest? Well this year, we went to Thorpe Park's Fright Night!

This time though, Michael had the wonderful idea of inviting some of my friends from Leeds that he hasn't seen for yonks, and I haven't seen for a while; Theana and Sam, and Harriet and Laurence. So, after many facebook messages back and forth, we managed to choose a date, find somewhere lovely to stay and arrange the whole thing!

As you can see on their website, their are different live action mazes for people to scare you, the rides stay open til late and there are people in character roaming the park with masks and chain saws! Compared to Alton Towers, it was so much better. Actors were allowed to touch you, which made things scarier (I always say to people "they aren't allowed to touch you, if you're scared, just move past them, they can't do anything). WELL THAT'S NOT TRUE! They an do something. They can hold you in that space and touch your face with their fake gnawed arm (true story). And something else that was also better, was that some of the mazes were free play - no holding on to someone in front of you, no safety in numbers, just you making your way through the darkness. Of course I held Michael's hand (dragged him through some of it...) the whole time, but the fact no-one's reassuring hands were on my shoulders added a much needed eery edge.

Because the mazes were so popular, the queues were quite long. That was okay though, because they had actors patrolling and tormenting poor unknowing souls! Check out Sam, he was not okay with that haha.

If you can get down there, I urge you to go! We got the tickets through tesco again so it was relatively cheap, and so much fun. If you do go, save cabin in the woods til last, it was easily the best one.

Posted by StaceyFacex at 14:58 3 comments Posted by StaceyFacex at 02:15 1 comments

I'm currently commuting an hour to work, this isn't so bad as it's for a night shift, three consecutive evenings a week. That means I can drive up one evening, do the night shift, spend a day in that town, do the night shift, spend another day there, do a night shift, and then come home. Unfortunately though, that means I see less of Michael because it's also the only days he comes home during the week, hmph. That said, my boy is the loveliest. and yeah I know a lot of people say that, but he recently came up on that middle day so I didn't have to be by myself.

We went to a lovely little farm shop and cafe (that was seriously delicious, I'd certainly go back!), then for a walk around Haldon Forest Park (that has so much to offer!). I unfortunately haven't worn my walking boots for a good year, and got an incredible blister than Michael wanted to pop badly ha. We started off on the raptor trail (because of our love of dinosaurs, clearly). But then got distracted by the cycle paths that looked so much more interesting.

So down those paths we wandered, and found conkers -

we got to the beautiful top, which would have been even more incredible on a clear day, but still lovely

And headed back down to the loo's. Where we found this cool fire pit!

It was a wonderfully fun day, spent with my favourite person, chatting about ridiculous and peculiar things the whole time. I am very lucky.

Posted by StaceyFacex at 04:08 1 comments

What I wore: Blue Striped

I can't lie, I wore this yesterday and decided it was so comfy/I liked it so much I wanted to wear it for two days, ha. Do you ever do that? Just me. Ah well. So yes, simple striped tee from H&M, those trousers from Matalans and a cheapy belt (that I found is not broken wah) from primark. Scarf was from a charity shop and my new favourite. I bought it planning on making it into a skirt but now I've become far too attached to it, darn.

Nice and easy for autumn.

Posted by StaceyFacex at 05:54 4 comments

Having sorted the floor, the next step was painting. This was a long old task because the colour in my head did not easily transfer to the colour on my wall. Having bought numerous tester pots....

These are the colours I chose

but after I took this photo of Michaela face on my bed, I realised that his T-shirt blue was the colour I actually wanted.. oh well, it would have been real difficult to find!

Painting took DAYYYYYYYSSSSS. okay two, perhaps three. But I'm kind of impatient. The general idea for colours was blue on that wall (as you can see), dark grey on that wall (again, as you can see) and lighter grey on the window wall. I don't know why I needed three colours, but it's what I was feeling so it happened. I also chose a dark brown gloss for the wall moldings and door. I slightly regret this decision, as really it needs to be lighter.. but that's something I'm working on (with sandpaper).

So with my walls painted, the organising and bed came next!

And there you have it! That's all I have to show you currently. The painting and floors are all sorted, the bed made and the cupboards organised. I still need new curtains and I want to distress the walls a little, think this, this and this. I also need something to go above my bed there, some kind of feature. I'm thinking an old kind of frame that's quite big, or a big mirror or something. But we'll see.. I haven't found anything in the charity shops/car boot sale just yet.

Posted by StaceyFacex at 04:05 0 comments

Now it's turning into Autumn I'm much more drawn to soups, stews and roasts. Food that warms you and the house, for a little extra lovin' Very standard soup recipe really:
3 carrots,
1 sweet potato,
2 rashers of bacon (needed more really but I didn't want to defrost any)
chicken stock
salt, pepper and rosemary (as much as you like, I think the rosemary really makes it)

Posted by StaceyFacex at 06:44 2 comments