Fish Pie with a Pea and Mint Dip

I decided to make my father and I a yummy dinner this week, so yummy in fact, that I want to share it with you!

I used Rick Stein's recipe (the God of fish recipes) but adapted it to the ingredients I had/like.

for starters, I'm not the biggest fan of eggs, especially hard boiled, so I lost those straight away.
I also didn't have any cream, so that was lost, and I also only had UHT milk, so that was used!
Yeah, and I didn't have cloves or nutmeg so they were gone too.
I didn't get the specific fish either - as long as one was a bit plainer and one was smoked, I would have used any. Tesco's, however, have a handy fish pie pack all ready with the fish cut.
Dad forgot to tell me that his Parsley plant died off in all the rain, so the parsley was left out, but I don't recommend that - I will definitely put it in next time.

Basically I had a very very basic version of this recipe which included;


I made my sauce too thick as I put 4-5 spoons rather than 2-3 and I would do exactly that again because it was extra tastey! Follow the instruction as Rick suggests in the recipe.

To the side of this dish I decided to make minted peas, as I don't like peas by themselves but minted they are bearable! I found in the latest Morrisons magazine a recipe for a pea and mint dip, so instead I tried that..

Boil all the ingredients on the hob until the peas are cooked (not all of the mint leaves, only about 5 and leave the rest out). Drain most but not all of the water, and then place all ingredients (and the extra leaves) in the blender and add some olive oil. Taste to test the seasoning. Pulse until a smooth paste.

I personally found the peas a bit chalky, like humus, so I would not pulse into a paste again, just a little blip for a chunkier side dish.

Drain into a bowl and swirl in some olive oil if you think you're fancy enough. 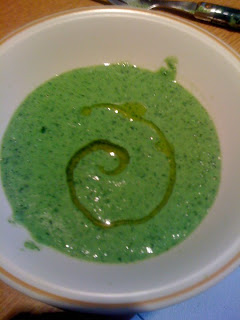 I also had some garlic bread alongside mine, even though it wasn't necessary with my individual portion sizes being a bit ambitious! and look what I found when I got it out of the packet. 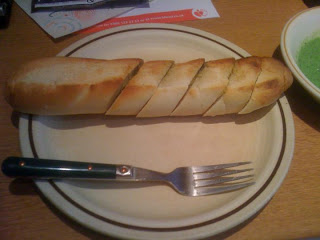 Half cut and buttered. What a con!
Hope you enjoy the recipe :)