Have you ever just had one of those days, where it goes absolutely fine, nothing bad happens, but you just want to be left alone? Where you want to run away and slip into a deep slumber so you can be by yourself in your own world?

I'm there right now. And I wish I had a den to hide in. 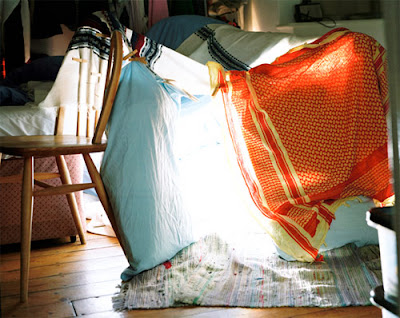 This is my heaven! 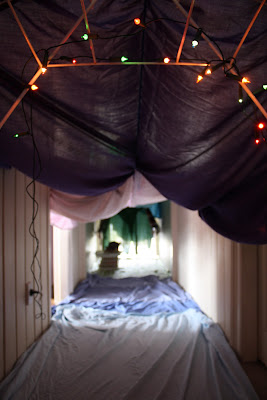 I decided that using a clothes dryer would be the best idea cause you can move it around and it's tall enough etc, went downstairs to get one and they're all in use. That's the day I'm having. I don't NEED that dryer so it hasn't really put me out, but I wanted it to make myself feel better and I couldn't. I remembered Theana had another one in her room, so I asked if I could borrow it. It's not the style I wanted and it's a bit shorter but a den is a den. I laid out a bed spread, got a bed undersheet out, fiddled around a bit and made my den. I had to add my long mirror because it drooped in the middle, and once I was under it I needed to pull the canopy a bit tighter so I wasn't brushing my head every 2 seconds, but here I am, in my den, writing to you. I decided to put it next to the radiator rather than in my bed so that it'd be uber warm. but the heating isn't on. so it's not.

The only draw back of this, is that once you're in it's kinda difficult to get out, but who would want to leave such a nice place anyways? And the only thing that makes me sad about my den, is that I have to take it down tonight, as I will need to get into my wardrobe tomorrow.
Michael, I know you'll end up reading this at some point. I'm sorry for being so grumpy.

Alyna came in to see my fort, as did Theana. Alyna snapped some photographs of Theana and I in the den, but then they both left me to being grumpy again. Please excuse the blurriness... Alyna used my SLR but isn't used to it.

Email ThisBlogThis!Share to TwitterShare to FacebookShare to Pinterest
Labels: build your own fort, den, Fort, fort in your bedroom, fort made out of sheets, home made fort, making your own den