For Rachael's birthday I've already mentioned we had a murder mystery party.. here are the characters;

Countess Bogov (the birthday girl herself) 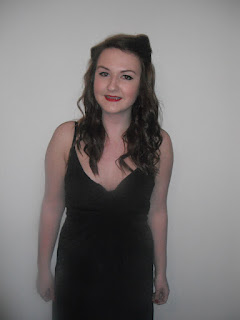 Seamus O'Hack
There was so much food; pary food, pizza, cheese board, chicken, couscous, eclairs, cheesecake etc and everyone got fat full and merry together.. I won't tell you who the murderer was just in case anyone googles the game and gets the same characters etc.

Earlier in the day we had to go to the shop to buy some birthday foooood..

Would you believe Aly is the eldest??

When we got back wehad  afternoon tea and birthday cake

and then getting ready in the evening...

I curled everyone's hair and Alyna showed us how to do glory roll's!
We missed Harriet this weekend :( So we made a cut out of her instead!

We also got to play with Otto's Monocle haha

Have you ever been to a murder mystery party?