Yesterday I spent the day with my sister and niece, it was a really lovely day as always, which makes it so much harder to think about leaving. We went to a store to pick up some things I'll need for the move which was handy, and spent the day... well eating to be honest haha, and chatting :)

After a sushi lunch we had pop tarts - two different flavours, bursting berry and apple something (both delicious, apple was my fave though). I got the first two out of the toaster fine, but they were rather warm. Then Isabelle wanted to come to me so as I was holding her, Natalie got the second load of pop tarts out of the toaster (we both had one of the flavours each). Well. She didn't realise how hot it was and managed to FLING it out of the toaster onto the plate. As it laid there, shiny side down, I knew it was a problem, I don't know how - we never ever have pop tarts - but I knew. So she managed to get the other one out better and I said 'you need to turn that over now!' and when she tried, it was stuck. Not sticky stuck, not slightly annoying that the flavouring is mostly left on the place and Ill have to eat a little bit with each mouthful, soaking-in-boiling-water-and-then-scraping-with-something-hard stuck. It was ridiculous! But hilarious at the same time, and I wonder where that little nugget of information that was buried in my head came from. 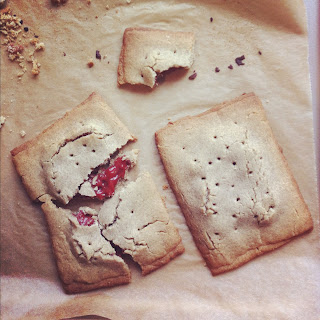 (so much worse than this.)

Have you ever had such disastrous pop-tart issues? Do you have any further tips or hints, because we have a pack of twelve to ruin else... haha